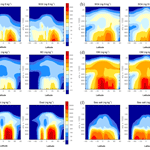 Abstract. We document model updates and present and discuss modeling and validation results from a further developed production-tagged aerosol module, OsloAero5.3, for use in Earth system models. The aerosol module has in this study been implemented and applied in CAM5.3-Oslo. This model is based on CAM5.3–CESM1.2 and its own predecessor model version CAM4-Oslo. OsloAero5.3 has improved treatment of emissions, aerosol chemistry, particle life cycle, and aerosol–cloud interactions compared to its predecessor OsloAero4.0 in CAM4-Oslo. The main new features consist of improved aerosol sources; the module now explicitly accounts for aerosol particle nucleation and secondary organic aerosol production, with new emissions schemes also for sea salt, dimethyl sulfide (DMS), and marine primary organics. Mineral dust emissions are updated as well, adopting the formulation of CESM1.2. The improved model representation of aerosol–cloud interactions now resolves heterogeneous ice nucleation based on black carbon (BC) and mineral dust calculated by the model and treats the activation of cloud condensation nuclei (CCN) as in CAM5.3. Compared to OsloAero4.0 in CAM4-Oslo, the black carbon (BC) mass concentrations are less excessive aloft, with a better fit to observations. Near-surface mass concentrations of BC and sea salt aerosols are also less biased, while sulfate and mineral dust are slightly more biased. Although appearing quite similar for CAM5.3-Oslo and CAM4-Oslo, the validation results for organic matter (OM) are inconclusive, since both of the respective versions of OsloAero are equipped with a limited number of OM tracers for the sake of computational efficiency. Any information about the assumed mass ratios of OM to organic carbon (OC) for different types of OM sources is lost in the transport module. Assuming that observed OC concentrations scaled by 1.4 are representative for the modeled OM concentrations, CAM5.3-Oslo with OsloAero5.3 is slightly inferior for the very sparsely available observation data. Comparing clear-sky column-integrated optical properties with data from ground-based remote sensing, we find a negative bias in optical depth globally; however, it is not as strong as in CAM4-Oslo, but has positive biases in some areas typically dominated by mineral dust emissions. Aerosol absorption has a larger negative bias than the optical depth globally. This is reflected in a lower positive bias in areas where mineral dust is the main contributor to absorption. Globally, the low bias in absorption is smaller than in CAM4-Oslo. The Ångström parameter exhibits small biases both globally and regionally, suggesting that the aerosol particle sizes are reasonably well represented. Cloud-top droplet number concentrations over oceans are generally underestimated compared to satellite retrievals, but seem to be overestimated downwind of major emissions of dust and biomass burning sources. Finally, we find small changes in direct radiative forcing at the top of the atmosphere, while the cloud radiative forcing due to anthropogenic aerosols is now more negative than in CAM4-Oslo, being on the strong side compared to the multi-model estimate in IPCC AR5. Although not all validation results in this study show improvement for the present CAM5.3-Oslo version, the extended and updated aerosol module OsloAero5.3 is more advanced and applicable than its predecessor OsloAero4.0, as it includes new parameterizations that more readily facilitate sensitivity and process studies and use in climate and Earth system model studies in general.

The requested paper has a corresponding corrigendum published. Please read the corrigendum first before downloading the article.